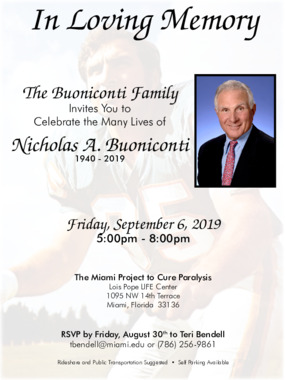 "Today, with a heavy heart and profound sorrow, my family and the entire Miami Project to Cure Paralysis and Buoniconti Fund community mourn the loss of a man who was truly larger than life, my father, NFL Hall of Famer Nick Buoniconti. My dad has been my hero and represents what I have always aspired to be; a leader, a mentor and a champion. He selflessly gave all to football, to his family and to those who are less fortunate. He made a promise to me that turned into a revolution in paralysis research. We can best honor his dedication and endless commitment by continuing with our work until that promise is fulfilled and a cure is found," Marc Buoniconti.

Nicholas A. Buoniconti was always a man of action. He would see challenges and attack them with the same vigor that made him a National Football League Hall of Fame linebacker and a two-time World Champion. After his playing days, he focused that same drive and determination into several diverse careers.

While many find it difficult to balance one career, Nick Buoniconti balanced many over the years. As a young football professional, he juggled the rigors of a sports career and law school, then a law practice. He graduated from Suffolk University Law School and was a member of the Bar in both Florida and in Massachusetts.

For twenty-three seasons he was co-host of the longest running, critically acclaimed, weekly television sports show "Inside the NFL" on the HBO cable network. Over the years he has held the position of President and Chief Operating Officer of UST, a Fortune 500 company, served on the UST Board of Directors and was Chief Operating Officer and Vice Chairman of Columbia Laboratories, an AMEX listed pharmaceutical research and development company.

He also served as an outside director for The Sports Authority, American Bankers Insurance Company, Nine West Group, Inc. and is a former member of the Board of Governors of the United Service Organization (USO), to name a few.

As remarkable as his career was been in sports, business and broadcasting, his most challenging foe turned into his passion and driving force. When his son Marc suffered a devastating spinal cord injury in 1985, he focused most of his attention on raising awareness of, and funds for, spinal cord injury research. He helped found and served as a national spokesman and fundraiser for The Miami Project to Cure Paralysis. He and his family also founded The Buoniconti Fund to Cure Paralysis to help The Miami Project achieve its national and international goal of finding a cure for spinal cord injuries. To that end, through the direct involvement of the Buoniconti's, more than $500 million has been raised in support of The Miami Project's research programs. In that time The Miami Project, at the University of Miami Miller School of Medicine, has grown to become internationally recognized as one of the leading research centers for spinal cord and brain injuries in the world.

An All-American linebacker and team captain at the University of Notre Dame, Nick was drafted by the Boston Patriots in 1962 and was an All-AFL choice in five of his seven seasons with the Patriots. In 1969, he was traded to the Miami Dolphins, where he was an All-Pro Linebacker and captain of the famous Dolphins' No-Name Defense. He anchored the defensive team in the undefeated season of 1972 that went on to become Super Bowl champions in 1972 and 1973. He was named to the Pro Bowl team both years and his teammates voted him Most Valuable Dolphin in 1973. He retired from football in 1976 as a six-time All-AFL selection, as a member of the all-time AFL team, and with eight Pro Bowl appearances to his credit. On August 4, 2001, Nick Buoniconti was inducted into the Pro Football Hall of Fame in Canton, Ohio. He is also a member of the New England Patriots Hall of Fame and the Miami Dolphins Hall of Fame.

"Nick was a man of honor, intelligence and humanity, who possessed a profound intensity which he brought to every aspect of his life. If men are judged by what they leave behind, then Nick's statue in the Football Hall of Fame pales in comparison with his accomplishments off the field. It is well-documented that Nick was not just a retired football player; he became a lawyer, sports agent and executive and excelled at them all. For many others, however, he will be forever remembered as the driving force behind The Miami Project and The Buoniconti Fund to Cure Paralysis. With the same intensity he used to sack opposing quarterbacks and by the sheer force of his will, he helped raise hundreds of millions of dollars for spinal cord injury research. For those of us touched by his greatest mission, he will live on forever," John P. Fox, Executive Director, The Miami Project to Cure Paralysis.

Mr. Buoniconti also supported research of the devastating concussions suffered by many football players due to repeated hits to the head. He donated his brain to the C.T.E. Center of Boston University; where scientist study the long-term effects of this degenerative disease linked to head trauma. Nick was dedicated to helping the countless other football players who are struggling with the effect of CTE.

Throughout his entire life, Nick has always put others in front on his personal desires and aspirations. His never-ending efforts to better humanity has earned him the well-deserved title of hero.

In Memoriam published in

Be the first to share a memory or condolence.